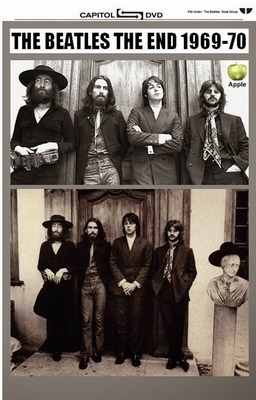 -2 Goodbye Released 28th March 1969 – This is a Mary Hopkin performance.
Seems to be from “Beat Club News” and is a promo featuring Paul. Tony
Bramwell of Apple attended the recording session and filmed some of it on
16mm film to be used as as a promo. This is it, showing Paul and Mary
talking and working – not miming. Although it is in black-and-white, the
bits with Paul are repeated briefly in colour at the end. It was never
shown on British T.V. 2:20

-4 George Gets Busted Silent Newsreel Footage – Extremely brief ! 12th March
1969 – George and Patti arrived late at Paul’s wedding reception because
the notorious Sergeant Pilcher chose Paul’s wedding day to raid George’s
house for drugs, bringing a large piece of hashish with them (in case they
didn’t find anything) which they then “found” on the floor. They were
taken to Esher Police Station and formally charged with possession of
cannabis resin. Pilcher was found guilty of police corruption in October
1972 and jailed for 6 years. 0:08

-5 Paul Marries Linda Newsreel Footage – Different sources spliced together.
Some are silent, some in colour, some the same but with different language
voice-overs. A Mess.12th March 1969 – Paul and Linda were married at
Marylebone Register Office, with his brother Michael and roadie Mal Evans
as witnesses. Afterwards they went to St John’s Wood Church where their
marriage was blessed by the Rev. Noel Perry-Gore. There was a luncheon
reception afterwards at the Ritz Hotel attended by Princess Margaret and
Lord Snowdon. None of the other Beatles attended the wedding. 10:41

-6 Paul at London Airport Interview with Paul and Linda 167th March 1969 –
Paul and Linda with Heather flew to New York to spend three weeks with her
family. 1:05

-7 John Marries Yoko Newsreel Footage 20th March 1969 – John and Yoko, still
in Paris, had tried to get married on the cross-channel ferry but were
refused permission to board The Dragon at Southampton because of
“inconsistencies in their passports”. Peter Brown at Apple found that they
could get married on the British-governed island of Gibraltar. John, Yoko,
Peter Brown and official photographer David Nutter flew to Gibraltar by
private jet. They arrived at 8.30am and were at the British Consulate when
it opened at 9am. There, registrar Cecil Wheeler married them with Peter
Brown and David Nutter as their witnesses. They remained in Gibraltar for
just 70 minutes before flying straight back to Paris and their luxury
suite. 0:56

-9 George After Court Newsreel Footage – Silent and extremely brief 31st
March 1969 – George and Patti were found guilty of possession of cannabis
at Esher and Walton Magistrates’ Court and were each fined £250 with ten
guineas costs. 0:07

-10 John at London Airport John and Yoko – Newsreel Footage, initially
silent, then some interview 1st April 1969 – John and Yoko returned to
London and gave a press conference at Heathrow. 1:28

-12 Don’t Let Me Down Promo (seated in studio, plus rooftop performance) 3:19

-15 Ringo in Southampton Ringo with Peter Sellers – Newsreel Footage 16th May
1969 – Ringo and Maureen, Peter Sellers and his wife, director Joe
McGrath and producer Denis O’Dell and their wives were given a free trip
to New York on the newly launched Queen Elizabeth II by Commonwealth
United, the backers of The Magic Christian, as a reward for bringing in
the film on time and under budget. In this clip Ringo and Sellers are
seen dancing, then a brief interview 1:01

-16 John in Freeport John and Yoko in Freeport – Brief clip. 25th May 1969 –
Freeport is a city on the island of Grand Bahama. John and Yoko intended
to hold another bed-in for peace at the Sheraton Oceanus Hotel but found
it too hot there to stay in bed and wanted to go elsewhere. In this clip
John is told that Air Canada will fly them and he breaks into song. 0:08

-17 John in Toronto Newsreel Footage (Silent) 26th May 1969 – They were held
at the airport for two and a half hours by the immigration authorities
but were eventually allowed to enter the country where they spent the
night of 25th May in a Toronto motel, before flying out the next day.
0:51

-21 Isle of Wight Newsreel Footage (Silent !) 31st August 1969 – John, George
and Ringo saw Bob Dylan & The Band headline at the Isle of Wight rock
festival. In this brief clip John and Ringo are seen in the audience
while Dylan is on stage. 0:38

-25 Paul in Campbeltown Newsreel Footage (colour) 24th October 1969 – Paul
was interviewed on his Scottish farm by BBC journalist Chris Drake who
was determined to put an end to the absurd “Paul is dead” rumours coming
from the States. This clip though, just shows Paul wandering around with
Martha. 1:24

-27 John in Paris 26th January 1970 Trapped by fog, John is interviewed at
the Hilton and reveals his new short haircut 1:30

-32 Two Of Us Ed Sullivan presents the Beatles Songbook, followed by the full
promo’s with the Apple Ident. Fades with Hey Jude. 4:32

-39 Paul at the High Court Newsreel footage – Silent and very brief – blink
and you miss it.19th February 1971 – This is day one of The Beatles High
Court Case 0:04